Digital transformation and technology are driving organisations to a new way of working in a rapidly changing environment. Therefore, the time has come for another edition of the world’s favorite IT service management best practice framework. ITIL has evolved and is ready to support organizations in the modern age. ITIL 4 is set to be released in early 2019. 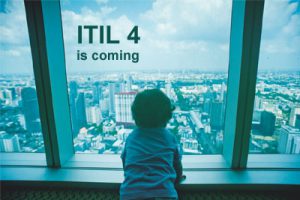 AXELOS, the owner of the ITIL framework, has changed his traditional approach with this ITIL 4 update process. To be even more relevant than ever before, a worldwide community of industry experts and users is involved in the development of this update. The research phase alone has taken over a year. Thousands of ITIL practitioners have provided their input. The result of this effort by both the user community and respected experts is a balanced, up-to-date and in-depth framework.

Because there’s no need to change what’s good, most processes are retained in ITIL 4. Although very few substantive details have yet been made public, it is clear that the focus of the new release will be on integrated service management. This vision emphasizes the integration of many best practice frameworks such as DevOps and Lean.

As soon as the official exams will be available, we will provide the new ITL 4 Foundations course on our e-learning platform. In addition, we’ll have open classroom trainings early next year. Follow our ITIL 4 update on Linkedin to be amongst the first to be ITIL 4 educated and certified.

AXELOS has just announced the new ITIL certification scheme on Fusion18. It’s more focused towards the practical application of specific tasks and needs in the market with two tracks leading to ITIL Master. AXELOS will soon provide details of how you can go about upgrading your ITIL v3 knowledge to embrace what’s new in ITIL 4. In the meantime, ITIL v3 training and certification remains valuable, thanks to the bridging that is undoubtedly foreseen and which allows you to quickly and relatively easily upgrade your current certificates.

Feel free to share this information with your network.